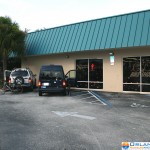 I was invited to come up to Ormond Beach to try a 10K time trial, put on by The Bike Shop. Owner Jack Gonzales posted it in our Facebook Group and invited me up.

I was warned it was rather informally done but pleasantly surprised at how much fun I had. It may be “loosely” run but the guys know what they are doing and put on a great little race. For a practice TT to gauge your progress, it’s perfect.

This is a FREE time trial. It is not sanctioned by anyone, it’s just a group ride that has a TT in the middle of it really. The group meets at The Bike Shop around 6:15 and departs out through town to a very pretty country road. They go about 12 miles as a group out to the entry of a neighborhood, where they have an interesting method of running the race. The first rider gets everyone to line up and then walks down the list and gets everyone’s name. Then he hands the list to the last rider, who starts everyone. Once the first rider has a significant enough head start to avoid being caught he sends the next rider, and then a rider every 30 seconds after. Finally, the last rider goes at his designated time.

Meanwhile the first rider has reached the finish line and is starting to take times as other riders finish. Since he asked everyone their name, and probably has a great memory, he writes down the finish times. (I’m impressed with that!)

All in all a simple yet effective system that allows everyone to race.

Following the race, the group rides back to the bike shop as a cool down. And, there may be some “socializing” after.

The road could be better. It is pretty rough. It reminded me a lot of the last 6 miles of the state TT in Palm Beach this year, or if anyone has been on the old Chuck Lennon TT course, that was about the same. Other than that though it’s a nice, flat course. A lot of shade, very little crosswind, a lot of scenery and not a lot of traffic. There is no bike lane but the car drivers were all very polite and considerate. No honks, no close passes or other incidents marred my ride.

It comes out to exactly 6.22 miles on my Garmin

TTTT Course. Start to Finish is right at 6.22 miles

The group ride outbound gave me plenty of time to “warmup” (see Other Comments below) so I was ready to go when my time came. I was a little concerned about a storm looming off to the west but never felt a drop of rain.

I started about 20th in line and had 4 or 5 behind me so quite a good turnout. I asked the guys behind me to say something nice when they passed me 🙂

Finally my turn came and I was worried, because this group had gone FAST on the way out (dropped me in fact) and I was afraid I would get blown out. I pedaled fairly hard right away to get my HR up to about 145. My plan was to do three 2 mile segments. Segment one: about 145-150 HR, Segment two: 155, and segment three ramp it up to all I had. I was kind of watching power as well but not really, as I am not familiar enough with it yet. I could feel lactic acid almost immediately but I attributed that to being “loaded up” from waiting so long to start.

I did not have a rabbit for the first two segments. Apparently the guy right in front of me was pretty fast. Also, I kept waiting for someone to steam by me and it never happened. In segment 3 I caught sight of “Jose”, a guy wearing an Amway jersey that I had a lengthy conversation with (I was in that business for many years.) It took me up until under a mile to go but I caught him. As I passed him I said “Come on! Less than a mile to go!” I inspired him, as he passed me back in a sprint to the finish. I tried to sprint but I did not have anything left in the tank (that’s a good thing!) 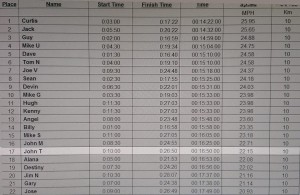 Official results from The Bike Shop

My Power Agent readout for the TTTT. I started the Garmin at t-minus 3 and stopped it shortly after finishing.

The only two negative things about the ride is:
1) The outbound group ride is mixed with people who are going off and doing a longer ride. Some of them were riding on aerobars in the group(!) This is a big no-no. Not safe!
2) The road itself needs paving badly. There are some serious potholes and several bumpy sections. A few times I got bumped so hard my arm slipped off the aero pads.

Other than that, a really fun ride and a beautiful area to ride. Worth the hour and 20 minute drive up there. I have the next one on my calendar, July 24th.