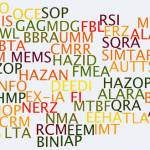 Try-athletes (which includes triathletes, runners, cyclists, etc) are always talking in acronyms. They also use a lot of terminology that’s NOT acronyms, but we’ll save that for another page. Back to acronyms, if you walk in to the local running store, coffee shop or bike shop, be ready to handle the barrage of initials. We’re not sure why but we think it’s probably related to the reasons they spend multiple thousands of dollars on bikes, wheels, running shoes and accessories.

What do all these letters MEAN?

First of all, a disclaimer. We do not claim to know exactly what all these letters mean. This is only what our research has shown so far. Since this is going on our Facebook page as well, we are sure there will be many changes suggested.

In attempt to show some organization, we’ll do this alphabetically which has nothing to do with proper order.

DZ – Dave Zabriski. A man whose initials are now immortalized due to one, absolutely essential product.

FTP – Functional Threshold Power. An interesting and elusive number. The power a cyclist can generate over a specified period of time that approaches but does not quite reach the Lactic Acid Threshold (see LAT below). This number is really more of a range, since so many factors affect it: Nutrition, sleep or lack thereof, stress, weather conditions and athlete attitude, to name a few. They spend a lot of time on this one. Way too much time. You should see the calculus equations and big words they use talking about it. Words like “asymptotic”, “anaerobic”, and “ventilatory”. We just want to ride our bikes, not become biological physicists. If you can’t resist diving into nerd world read Joel Friel’s Blog. At least he has a good sense of humor about it.

GPS – Global Position System (but you knew that one). A very expensive and cumbersome device that almost always, but not quite, completely fails to accurately record your workout.

HH – Horrible Hundred. A sadistic century ride put on every November in the Clermont hills by Florida Freewheelers (FFW) (but not as sadistic as Six Gap, which strangely has no acronym, unless you count 6GAP as an acronym, which it isn’t.)

HR – Heart Rate (measured in beats per minute or BPM)

HRM – Heart Rate Monitor. This actually refers to the strap that goes across the athlete’s chest, which then transmits the data to a receiver, such as a Garmin GPS Computer. The strap has several possible transmission formats (ANT+, Bluetooth, etc) all guaranteed to fail when you need them the most, or start picking up the HR of the person next to you.

IF – Intensity Factor. The ratio of your average power in a particular workout to your FTP. In our opinion, this is a fairly useless number, since FTP varies so much on current conditions. But you’ll hear them in the coffee shops saying “I had a .95 IF today!” Cheers.

IM – Iron Man. No, not Robert Downey Jr. Well yes, but not ONLY him.

KOM – King of the Mountain, but also means fastest time on a defined segment on Strava.com. “Strava – breaking up group rides since 2010”

LAT (alternately LT) – Lactic Acid Threshold (or Lactate Threshold). Another interesting and elusive number that refers to that point where your bloodstream can no longer remove the Lactic Acid from your muscles faster than it is produced. Results in a dull, tired, painful feeling in the muscle. The trick is what you use to measure it. Coaches will often refer to a power output in watts, or heart rate, but there are a lot of variables. Also known as the “Shut Up Legs” Threshold, thanks to Jens Voight.

LBS – Local Bike Shop. Good one to know. Buy from them. They provide support and service that websites don’t.

MP – Maximum Power. Useless unless we define for how LONG.

NP – Normalized Power. (As opposed to Abnormal Power?) Back in our engineering days we knew how to figure out what Normalized meant. Research has shown us that different people compute it differently. Garmin, who produces the majority of the cycling computers in use today, says it is “… a power averaging method, measured in watts, used to compensate for changes in ride conditions for a more accurate depiction of power expenditure. Conventional power measurement is based off of a steady resistance.” Garmin Website Support

PSI – Pounds per Square Inch. Used to measure the air in tires. Really big numbers for Triathlon bikes, like over 120.

PR – Personal Record. Also called “Puerto Rican” as in, “Hey Manny! I got a Puerto Rican on Sugarloaf today!”

QOM – “Queen of the Mountain”. Female version of KOM.

TT – Time Trial. A race where the rider traverses the course alone, in a race against the clock. Usually involves really expensive bikes that look like spaceships, strange tight clothing that no normal man would ever want to be seen in, and alien like helmets.

TTT – Team Time Trial. A race where more than one rider does the solo course together. Whut?

UCI – International Cyclist’s Union. Those French can’t even get letters in the right order.

XFL – a ridiculously hard, one day ride across Florida from Cocoa Beach to Homosassa Springs put on by Space Coast Freewheelers (SCFW)