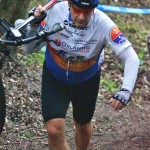 Once again the Central Florida Cyclocross gang assembled in Dade City for the third race weekend of the “Wicked Awesome Racing” series, now known as WAR. This was the third weekend of the three weekend series, hence the title “World WAR Three”.

This weekend we went back to Stanley Park, just north of Dade City. A very nice park with convenient facilities, lots of parking and lots of space to lay out a cyclocross course.

Our hosts Josh and Kayleigh Thornton put on a splendid show, as expected. Josh and his team, true to form, had laid out an extremely challenging, technical, difficult (and in some spots down right evil) course in Stanley Park. Not one person said it was easy.

The course was different from our last visit here, although the start/finish line was in the same place. There were some new wrinkles added, such as a high banked turn with a culvert at the bottom of the banking, and no flat space at the top. Several different styles were seen in this turn throughout the weekend. See video below:

The famous “run up” was still there, from the first weekend, a very steep climb up a set of stairs built in to the side of a nearly vertical drop. 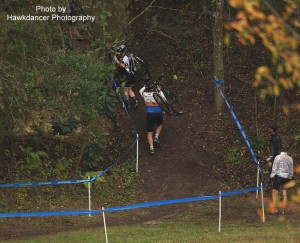 The famous “run up” in Stanley Park. It’s not completely vertical, it just feels like it.

The weather was gloomy and threatening Saturday, but very little rain actually fell. The course was slightly damp, but not a mud fest at all. In fact, the sand pits seemed to benefit from the early showers. Sunday was mostly dry and breezy, although at one time there was an actual sun shower. A thunderstorm was predicted for late afternoon but all races were done and all awards handed out long before any serious rain arrived on the scene.

John Tenney
I was in the unfamiliar position of leading the mountain bike series going in to this weekend. It added a little pressure to my performance and altered my strategy. My nearest competition present was my friend David Fleet with Armed Forces Racing Team.

I decided to forgo the Masters 55+ division and stick to two races, the Cat 4 and the MTB (of course). On Saturday I pushed a little too hard on the Cat 4 race and probably used up a lot of energy which would have been helpful in the important race, the MTB. Also, due to overcast skies and failing light, it was announced the MTB race would be started immediately after the Cat 4. I had to go back to the car to change my number and I ended up missing the start. The referee had me wait, along with David, who was also changing his number, and go out after the last rider crossed the S/F line and “gave” us a free lap. At first we tried our best to catch the other riders (David actually caught one) but both of us simultaneously decided that would not be fair, and we let up a bit. We ended up finishing 7th and 8th respectively, which gave us both 2 points for finishing, and did not alter the standings.

On Sunday I relaxed and just noodled around on the course in the Cat 4 race, getting heckled and conserving energy. I think it paid off. In the following MTB race (which was started on time, so had time to change my number) I managed to catch two MTB riders, and although I was gaining on David on my last lap, I didn’t get close. He finished 5th and I was 7th. A confusion on my part about bonus points led me to believe that we were now tied for first, and I would be relying on a tie breaker procedure to win the series jersey.

It turned out that I needn’t have worried. With 32 points I was 4 pts ahead of the second place rider Clint Gibbs with 28, and David ended up with 24 pts. We were surprised, because we thought we were tied for first. Oh well, it happens. A historic day for me as I won my first ever cycling series, the WAR MTB series. 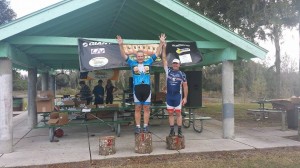 Standing on the MTB series podium for my first time ever winning a series. Second place Clint Gibbs had already left.

The course was very challenging to me. I was not handling it well the first day but persistence paid off and by the end of the second day I was navigating it with a lot more “comfort and ease.” I’m sending a special thank you to Josh and his team for making a hard course like that, which had the effect of making me a better rider. Results from all three WARs? A trophy, a few medals, a jersey and some really nice podium “swag”, but most important, a great time over all three weekends, making new friends and sharing laughs and jokes with old ones.

I love this sport.