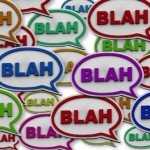 So you’ve started running, riding, swimming or whatever with a group and suddenly you feel like you are in a different country or something. “What language are these people speaking?” It’s worse for triathletes because they deal with languages from three different sports.

Here are a few to help you deal with this new culture of “smiling while crushing your friend in a race”:

Active Recovery: Or just “recovery” – this is exercising at a lower rate of effort to allow your muscles, lungs, etc a chance to recover without getting tight and inflexible. Pain for the sake of pain.

Adamo: A unique type of bicycle saddle that is designed to reduce numbness of the genitals while riding. Before this, talking about genital numbness with complete strangers at stop lights would have been considered weird.

Aero: Everything you buy has to be “Aero”, a short cut for saying “aerodynamic.” Mostly used as an adjective, as in “Wow like that new hair style, it looks really Aero.”

Aero Bars: Protrusions on the front of your bicycle that allow you to assume the Ultimate Pain position, which also happens to be more aerodynamic, or “Aero”. Sidebar: Aero bars have caused a lot of friction between pure cyclists and triathletes. Pure cyclists maintain, with some justification, that using aero bars in a group ride is dangerous. It certainly narrows the control area. However the majority of the history probably comes from the use of “clip on” aero bars by less experienced cyclists who have not had the seat time in the aero position. In any case, this particular accessory is a divisive element and a controversial topic in many cycling clubs. If your bike is one that is designed for Triathlons (or Time Trials) and has aero bars, be prepared for some sort of discussion when attending a group ride. Do not be surprised if you are asked to stay off your aero bars for the duration of the ride. Some historians believe these aero bars are the primary reason that cyclists call Triathlon “The Dark Side.”

Anaerobic Threshold: Also known as AT but is similar to VO2 (see our page on Acronyms) which stands for Maximum Volume of Oxygen. In this case it is the level of exercise above that which your lungs can handle and oxygen depletion occurs in your body. A wonderful feeling of gasping for breath which often leads to other pleasurable sensations, like vomiting.

Attack: “What? We’re attacking each other?” This comes from pro cycling but applies in all three legs of a tri. Any time someone pushes it up a little and tries to get some distance between themselves and another competitor it’s called an “attack.” It’s physical and psychological. The attacker is not only trying to tire out the other competitor but to break their spirit as well. All while smiling and saying “Isn’t this great?”

Bonk: Another term from cycling. There is a actually a technical definition but it is used for that point when you just run out of gas, and can’t keep up your pace, as in “I was doing well on the run but then I bonked at mile 10.” The technical definition involves depletion of blood sugar in the liver and muscles but people use it for more than that. See also Hitting the Wall

Brick: Comes from combining the words “bike” and “run” to get “brick” (??? really?) it means combining a bike segment and a run segment in to a workout. Also has been used to describe how your legs feel when you try to run after getting off a long bike ride.

Bunch: Any group of swimmers, riders or runners that are moving together, also called the “pack” or for French snobby types, the “peloton.”

Cadence: Used in various places, number of turns of your legs per minute is the standard measurement, but in swimming it would be “strokes”.

Chamois: (pronounced “Shammy”) A soft piece of leathery material sewn into the crotch of cycling shorts and tri-suits to prevent chafing and protect their genitals. You’ll notice a pattern here …

Chamois Butter: The “Special Sauce” applied to the “taint” to ease the pain of riding a bicycle over long distances. Kind of like Kleenex, Chamois Butter is actually a brand name. Other brand names include DZ Nuts, Butt Shield, and Assos.

Dolphin Dive: A method of getting out past breakers in a beach swim. Comes from surfing, it uses a lot of energy and may not be the best technique for “mature” triathletes.

Drop, or dropped: A verb that also comes to us from cycling. To “drop” someone is to leave them behind (see “Attack”). Applies to training rides mostly but runners will use it also as in “I dropped him at mile 7.”

Duathlon: Also called a “Dry”-athlon, since there is no swim, it is a “run-bike-run” event. Sometime the Triathlon is changed to this, if the water is not suitable for swimming at a particular venue due to flooding, cold temperatures, high bacteria count, shark attacks, amoebas, Loch Ness Monster sightings, etc. In this case they substitute a shorter running leg for the swim portion and call it a “Duathlon.” Duathlons are also scheduled at several events and growing in popularity. Much easier to put on than a triathlon, mostly due to the lack of a need for a body of water. Also makes it a lot easier to get liability insurance.

Fartlek: Pronounced “Fart-lick” it’s as gross as it sounds. You run as hard as you can for a specified interval (30 seconds, a minute, etc) then slow down to a “recovery” pace until you are almost recovered then do it again. Leads to Anaerobic Threshold which of course leads to, vomiting.

Full Manny: aka “The Full Manny,” it refers to perform your morning constitutional before your ride, run or swim. Dedicated to local legend Manny Espinosa who struggles to empty his bowels before his Sunday morning ride, and when he fails pushes everyone to get back to the CVS quickly for obvious reasons. You are said to be prepared when you take the Full Manny, as in “I’m ready for this ride, took The Full Manny at 6:30am.” Also known as “Gutensplatter”.

Gel: Has many meanings but the two most common are 1) small packets of nutritional “gel” that you squirt in to your mouth while training, which can be a very unpleasant sensation, and 2) the material used to fill up chamois pockets on various parts of the cycling saddle and uniform, particularly in the “nether regions.”

Half: Does not mean half of something. Well yes it does but the something changes based on context. In Triathlon a “Half” refers to a half ironman distance, or 2K swim, 56 mile bike and 13.1 mile run (which is a “half” marathon by the way.) People who complete this foolish event often brag about it by putting a “70.3” sticker / magnet on their car. You can just imagine what a “140.6” sticker / magnet means …

Interval: An evil form of training where you run, ride or swim at an elevated pace for a set interval to build up your speed. See “Fartlek”

Olympic: Does not really refer to the Olympics strangely enough, or not directly. It refers to the distance of an event that is sometimes run in the Olympics. Olympic Triathlon is supposed to be a 1.5K swim, 40K bike and 10K run. Oddly enough in the last Olympics the distances came out something almost, but not exactly, completely different.

Sprint: Can refer to a lot of things, such as what it sounds like but most often refers to the distance of a standard, short triathlon, .75K swim, 20K bike and 5K run. Actual distances vary …