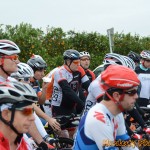 It’s still very early in the racing season, but several events have come and gone. Here is a brief synopsis of the Hourglass riders’ efforts and results in those events. Where possible we will give credit to the riders from our overseeing entity, the KBS team as well. The events will be done in reverse chronological order, so this post can be updated with the most recent event near the top. 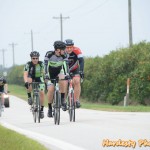 The Chain of Lakes race is held in the Fort Meade / Winter Haven area. Last year, I did the TT only. This year I tried the road race. I was joined in the cat 5 / Masters 35B group by several teammates, including Bill Edgbert from Hourglass and KBS riders Tom Elbel, Jose Cabrera, Whit Robinson, Claudio Macieira and a few others. The course was great, relatively smooth roads and only a few easy climbs.

For the first time, I stayed with the main pack for more than half a lap. After a really sharp turn the guy in front of me left a gap and didn’t close. I went around him to try and close up but it was too late, I couldn’t reach the pack. So I dropped back and found a few guys to form the Grupetto. I finished with them, about 20 minutes behind the main pack. No other race group caught us either so I call it a success.

Jose won the Masters 35B division and Tom was 5th in the cat 5. Not sure how the team did in any of the other divisions.

The rain swept in later on, so the Time Trial was cancelled.

I didn’t go to the crit (held Sunday in downtown Winter Haven) but I see from Facebook posts that a couple of the KBS Katz made podiums in the women’s races. 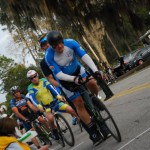 I’ll only cover the road race and TT as I missed the crit on Sunday. All I know about it is that KBS rider Ed Lally had a nasty crash and ended up with a concussion and stitches. He is OK!

The road race was on a 14 mile loop around Micanopy rural “roads” and I used the term lightly, as the road surface was mostly terrible. Many people enjoyed my comment that I should have brought a cyclocross bike. Numerous flat tires and crashes marred the races. Hopefully the road surfaces are redone before next year’s race. It is very difficult to find remote roads with little traffic and in good shape.

I raced in the combined Masters 35B / Cat 5 with Bill Edgbert from Hourglass, and several riders from KBS including Whit Robinson, Russell Ray, Ed Lally, Josh Jiannuzzi, David Rankin, and Claudio Macieira. I did a lap before for warmup, was worried about making it back and time and I pushed a little hard to get there, only to find a delay as other races were finishing. Once we did start, 30 minutes late, the lactic acid has built up in my legs and BAM I got dropped “like a toaster in a hot tub.” I found a “Grupetto” to ride with but flatted out on my second lap. So much for my race. 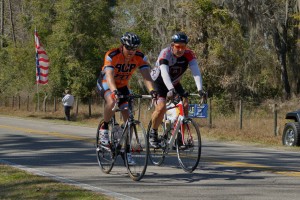 I rode with Walt here for a lap and a half before I flatted out and had to abandon.

The Time Trial didn’t start until 4:30. Most of the KBS riders took a shot at this challenging course with a couple of fairly steep climbs and long (long for Florida that is) descents. It was 7 miles long and my goal was to finish under 20 minutes. I managed 20:10 for 11th place out of 12 in Masters 50+. Pretty sure I lost at least 10 seconds in the turnaround as it was very narrow and constricted. My power output was not where I wanted to be though, at an average of 249 watts. I should be able to do 270. 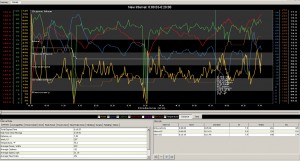 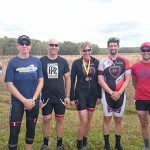 The second race of the series featured 52 riders and also a team time trial. Neither Hourglass nor KBS were able to field an entry for the TTT as too many of our riders were exhausted at the end of the 40K. Hourglass had two racers with Bill Edgbert and Pat Jennings in the Masters 50+ division. They finished 5th and 6th respectively with new PR times of 1:06:24 and 1:07:30, average speeds of 22.41 and 22.04 mph. KBS did well, with Kyle Markel in 5th, Chris Hardesty in 10th, in Cat 3/4/5, David Rankin 5th in Eddy Merckx, and Debora Haley winning Women Cat 3/4/5.

I was ready to get the bike out and race in the Team TTT but Bill and I couldn’t find a third, and teams must have 3 or 4 riders. Pat was willing but had a long drive back to St. Pete and simply ran out of time. Hopefully we get it going in the Memorial Day race. 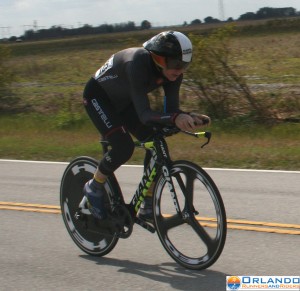 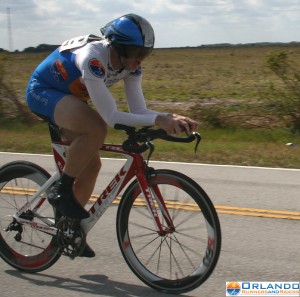 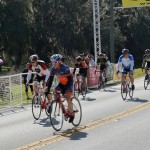 This annual event features challenging terrain in Clermont, FL for the road race, and one of the most scenic criterium / circuit routes I’ve ever seen.

The Saturday circuit / crit course rides around a 1.4 mile loop through Ferndale, FL which featured a freshly paved road. High speeds were attained on the new surface. 27 riders were in the Cat 5 race. Bill Edgbert scored a top 10 for the Hourglass team and even though I got dropped right away as a rider fell in front of me at the start, I finished my first crit ever in 23rd, 1 lap down, very pleased not to be last. Jeff Macre finished 13th, the 3rd KBS rider in the race.

The Sunday road race was a loop around 455 and 561, with some climbs including Makeout Mountain, The Wall, the as far as I know unnamed 561 climb, and a long drag uphill on 561A to the finish. Other than traffic concerns it’s a great course. 99% of the Clermont/Ferndale residents are respectful to cyclists but there is always that 1% that scare the life out of you. Always seems to be either a Ford pickup truck or a Prius (go figure.) 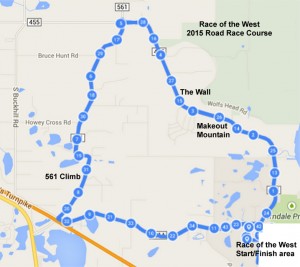 Road Race Course for 2015 Race of the West. A lot of climbing

I was the only Hourglass racer that day. I never saw Bill and I can’t find him in the results either. Josh Jiannuzzi and Jeff Macre were the other KBS riders in the Cat 5 race with me. About 30 seconds before the start we noticed Jeff’s number was on incorrectly. I unclipped to help him fix it. The ref was gracious and said “just put it on, get going you are going to miss your start” so I rushed it and Jeff got going and barely caught up to the field. I was not so fortunate. I got gapped and never caught up.

My new goal was to avoid being lapped. Approaching the finish of the 1st lap I was caught by the leaders of the Women Cat 4 group. I considered tagging along with them but we had been given a stern warning against drafting with a group different than your own. Still, I found myself riding near Lauren Chandler of the KBS Katz quite a bit that race, as she and Tish Kelly had gotten dropped from the main group. We eventually finished within seconds of each other. They were much faster up the hills but I would catch them on the downhills and flats. I finished my third lap without getting lapped although I knew the Cat 5 leaders were not far behind. I could see the flashing lights of the Lake County Deputy leading them out behind me.

I completed my fourth lap without incident, catching up to Lauren and Tish at the finish. Josh finished 15th, Jeff 20th and I ended up 29th in a field of 30. Not last! 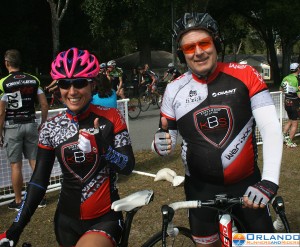 Lauren Chandler and I finished within seconds of each other, although we were not allowed to draft, being in different divisions. 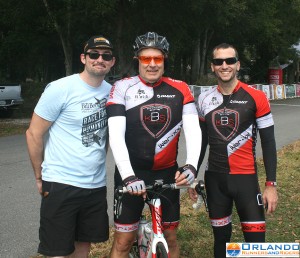 I missed this race due to illness and have very little knowledge of what happened. I know Bill Edgbert was there, finished the race 26th in Masters 35B but little else. It was very cold, I know that! 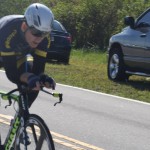 The first of our CFL Holiday Monday 40K TT series was well attended with 40 riders, with several from our overseeing team Kyle’s Bike Shop racing, but only two Hourglass riders (sort of) in the field. Dave Dixon was there but is an “honorary” member at this point. He still has not left his old team due to sponsor obligations. Pat Jennings had to carry the team flag, as I was officiating, and others from the team did not have the holiday off. Pat had a rough day and finished 8th in Masters 50+ with a time of 1:11:23, average speed of 20.8 mph over the 40K course. 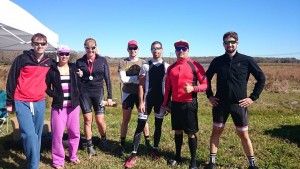