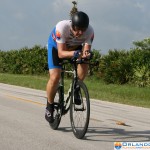 Orlando Runners and Riders held the Third Annual Charity Classic Time Trial on Memorial Day, May 26, 2014. Last year the event was held in Clermont, with a finish at the top of Sugarloaf Mountain Road. This year the course was a 40K (24.8 miles) out and back on Deer Park Road in St. Cloud, FL. The charities featured this year were Harvest Field Ministries, Cure on Wheels, Amateur Athlete Assistance and The Sean Ashman Foundation.

The Course / Venue
This is a great venue. Deer Park Road is in a remote area on the east side of Osceola county. The address of the southern end is 5779 County Route 419, St. Cloud oddly enough. It is a fairly smooth road, with no noticeable rough areas. There are some turns but they are gradual in nature. Other than a few rises to go over a creek on a small bridge it is basically flat. To our knowledge, there is no other useable stretch of road in Central Florida where a 40K out and back would be possible without stopping highway traffic. Speaking of traffic, it was very light. The occasional pick up truck pulling an airboat on a trailer, semi truck cutting across from 192 up to Nova road and then on to 520, or a motorcyclist stretching his legs, that’s pretty much it. During my entire 72 minute ride I saw four vehicles.

Facilities are another issue. There are no convenient stores within miles. Make sure your car is topped off before this trip. We brought a porta potty in for this one (which they put in the wrong place – 7 miles away from the start) but in the future, we are looking in to the Latter Day Saints church at the south end as a launch point.

Weather / Environment
The weather was really perfect. It was dead calm as we lined up to start. Temperature was 77 degrees at the start and 82 at the finish. I will remember to bring bug spray next time though, as the gnats were out in force. The sky was a high overcast, which broke through to partly cloudy by the end of the race.

The Race
I was running around trying to get all the last minute details done before I got on my bike. I got maybe a one mile warmup by riding quickly up to the Nova road corner and turning around. I wanted to be the last to start to make sure everyone got off OK, and to make sure William Thomas (doing start/finish duties for the first time) and Dave Severn (taking photos) didn’t need anything. I came up to the line second to last, as Tom McNeill was getting his affairs in order at the porta potty. He started 2 minutes after me.

I was still rushed as my start time came up. I barely managed to stuff a shot block in my mouth, put the wrapper back in my pocket and start my Garmin as William gave me the “go” sign. Probably lost a few seconds there. Then I couldn’t get clipped in. Another few seconds gone. Ah what the heck, it’s a long race. 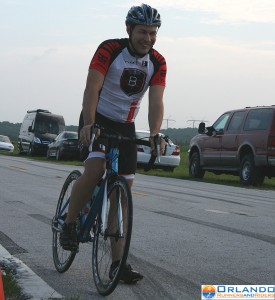 Tom McNeill from Kyle’s Bike Shop won the Eddy Merckx division with a 1:05:55

My goal was to keep my HR at or below 140 until the final stretch, and that way I was hoping to “negative split” (do the return leg faster than the out leg) so I jumped up to 22 mph and about 138 on HR. I pushed a little towards the end of the 5 mile segment (first of five in my head) and hit mile 5 at 13:53. That was a little fast as the HR went above 140, so I backed off for the next 5. Tom McNeill passed me somewhere around here. Young guys!

I caught up to Crockett in the second segment. He had started a couple of minutes ahead of me and was taking it easy, since this was his first long TT. We talked for a second and I pushed on. 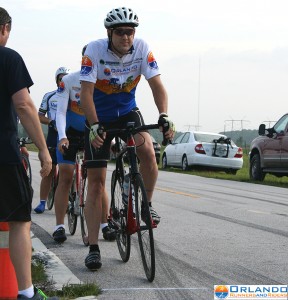 Crockett Bohannon waiting for his starting signal from William Thomas

The turn was really tight. I didn’t unclip, but I slowed down to nearly a stop to make it. Was really glad that Osceola County Sheriff Deputy Israel Davila was watching the turn for us. That is a very comfortable feeling! Gave him a wave and headed back north.

Suddenly I have a head wind. Where did this come from? Morning breeze I guess, rising up from the ENE. It made a difference. I was not able to maintain 20 mph without pushing the HR up so I just settled in at 140bpm. Also, my left arm was hurting from the aero position. Way too often for my liking, I had to sit up and shake it out. Need to figure that out. I also need to tip my seat down just a hair, as it was starting to hurt in the “forward regions.”

Segment 3 was my worst, at 15:33, which is just over 19 mph average. Once I got to the middle of the course though, there was more tree cover and less effect of the wind. Segment 4 I picked it up again and did 14:29, which was my second best (full) segment. The last segment was only 4.8 miles but finished in 13:35, which is the highest average speed, probably. 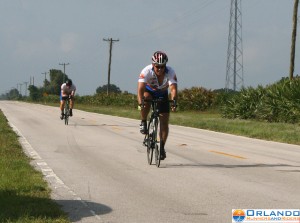 Chuck fought me off for 6 miles. He managed to stay 3 seconds ahead of me at the finish

I got Chuck Peabody in my sights somewhere in Segment 4 and it pushed me. It really helps to have a “rabbit” out there as a goal. He knew I was behind him too, as he started picking it up. I didn’t catch him. He stayed in front of me by three seconds at the finish. Good job Chuck! It still helped me finish with 1:12:13, which beats my last time on that course of 1:13:50, when we tried it out a month earlier.

Summary
This is a great course. It should be a great race. More people should come out and try this. I know the distance scares them but it shouldn’t. Why should someone who can do a century be afraid of a 25 mile time trial? I like Crockett’s approach, just ride it like a solo ride, and try to do a negative split. He did great, beating his goal of 1:20.

I hope we see more people at the next one.

Video of starts and finishes: 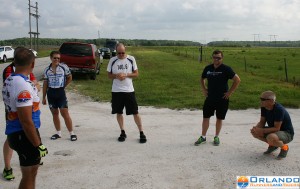 Bull session after the race. Actually waiting for Bill to return from the potty so we can do podiums 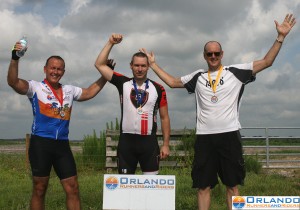 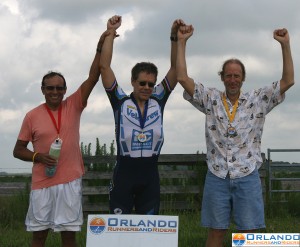