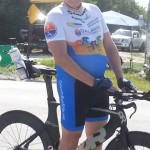 State TT race report from John Tenney and Bill Edgbert:
John – Friday
Got to the Palm Beach course a little late, around 6pm. Went out to ride the course, by myself. Bill and Wayne just drove it. Big dinner at Golden Corral with Bill, Lorraine and Wayne. They dropped me off, I drove back to Comfort Inn in Jupiter and slept well.

Saturday
Up at 6ish, had a nice breakfast at Comfort Inn. Got most of the Full Manny taken care of.

Out to the course, did some warmup. The sun was out and it was getting hot. My start time was 10:20 and they were on time. It was getting windy also. I couldn’t use the ghetto wheel, because it is technically not legal for UCI races so I switched to an 88mm rear wheel. The combination of 88mm on front and back wheels was not very stable. The seat was tipped a little forward too, so my left shoulder got a little sore. I completed the first 10 miles in under 30 minutes (about 29:45) so I felt good and was slightly ahead of schedule. I actually gained a little on Bill, who was one minute ahead of me (He was taking it easy for the first segment). As I turned on to the downwind leg, I was stuck behind a tractor pulling a device that spanned the road. I managed to squeak by but it slowed me a bit. Also, getting some noise from the bottom bracket. I stayed ahead of the 20 mph average until I turned on the downwind leg. I started dropping down to 18, 19 mph. Fortunately, I got a second wind and pushed it up to 24 mph at the end of the Hwy 98 segment. The last segment was slower though, as the road was bumpy, the wind was a factor and my shoulder started hurting more. I slugged through it and finished at 1:12:50 for a 20.3 mph average. I ended up 12th out of 13 Masters 55-59 that finished, HOWEVER, two of those guys missed their start times and did not get penalized. Seems a little unfair to me as I was there waiting for my start time, and not warming up as they probably were. 2 DNS filled out the field of 15.

Had a cool down ride after but I was pretty wiped out. Made my protein shake, jumped in the truck and started heading home, with XFL on my mind. 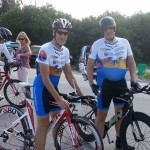 Same as Johns report except for the race. I was estimating finishing the race around 1 hour 5 minutes. Not a very competitive time when compared to what the field would be running but a doable time for me.

I started out easy and kept telling myself “do not start too hard” we have 40K to go. It was a little over 9 miles to the first turn so I kept the pace steady and kept looking for a smooth place to ride on the road. There was no traffic so that was the easy part.

After the first turn I got some help from the wind so I started to crank up the speed. The straight away after the first turn was short that was followed by a left turn another short section then a right turn with a longer section that took us to the return route. I kept the speed up on these shorter sections and raced to each turn.

When I got on the return route, which was a 4 lane highway, the wind was coming in from the right side but not to bad so I settled in to a pace and got ready for the last stretch which was a bumpy road 5 miles long with a head wind.

The last 5 miles were the toughest part of the race. At one point I had my head down and was struggling to keep the power at 100% and my speed was slowing due to the head wind and I asked myself if I was going to make it to the finish line. At that time I lifted my head an saw the finish line just around the corner. With that my cadence started to build and the speed went up. Got close to 100 rpm cadence and shifted to the next gear. I kept building more cadence and shifting to higher gears. I stopped looking at the power and concentrated on the cadence and speed. I turned the last corner and pushed as hard as i could to the finish line. I crossed the finish line around 27 MPH and let off but I could not stop pedaling. I had to slam on the brakes before I got to the corner.

I was totally spent. I rode around a while and then got off the bike and started thinking about the next day. The Cross Florida ride.

My time was 1 hour 5 minutes 26 seconds. I finished at my estimated time. All in all a good race. I have a better understanding of my FTP and can use that to tailor the trainer workouts so I can build the FTP up and get faster for next years 40K State TT. Looking forward to it. 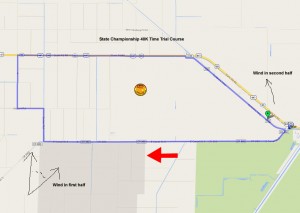 John’s map of the course with estimated wind direction