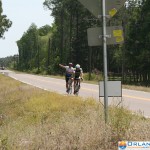 Up at 4:30, we packed and left the house at 5:15. Got to Alan Shepherd Park in Cocoa Beach around 6 am. Did the usual preparation stuff, said hi to many folks, and made frequent trips to the restroom of course. I was still pretty wiped out from the State Championship 40K Time Trial the day before. 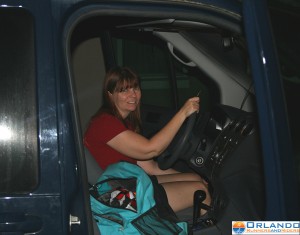 At 7am we rolled out from Cocoa Beach on our way to the other coast. The first hour was fast, riding along at 25mph typically in a large peloton. We covered more than 21 miles even with two bridges to climb (causeway).


About mile 30 to 35 Crockett, Morgan and I dropped off the back of the Eastside group, which had been doing 18-19mph but had started picking it up to 21-22. Somebody was pulling too fast up there. We stayed together for several miles. Morgan eventually started feeling better again and took off to catch up with the pack. 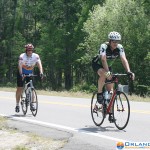 Our first stop was at mile 48 and went according to plan. next, we went 23 more miles, but accidentally beat Kathleen to the scheduled stop – a convenient store / gas station that was inconveniently closed for repairs. We only waited about 15 minutes for her and enjoyed the rest. After this we scheduled stops every 10 or 15 miles or so, because it was now getting hot and we were going through our water supplies very fast. This interrupted our “plan” a bit but we were still on schedule to make all the time limits. 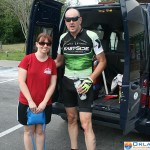 The whole time I was planning on calling it a day at some point and climbing in the truck with Kathleen to finish the ride. I was not expecting to have enough to make it to the end and was surprised when I started feeling better. At mile 127 I told Kathleen “I’m doing this!” and she was quite surprised. Crockett had told me to go on ahead and he would try to catch up. He was experiencing some stomach issues. (He did catch up after all, see below.)

Between mile 125 and mile 154 I got together with Kerry Smith, from Crystal River, who was willing to slow down a bit to ride with me. I was fighting “the bonk”, where my body had run out of easily accessible resources and was down to burning fat. I could only go 14 or 15 miles an hour on level ground, and unfortunately there wasn’t much of that left, as the course was getting rather “hilly.” 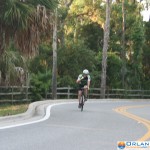 At the last stop I made, mile 154, I told Crockett (who was coming in as I was leaving) that I was glad to see him still rolling and would see him at the finish. Little did I know he would beat me to the finish by over an hour.

I skipped the last stop at mile 160 (Kathleen cheered for me as I rode by) and went on ahead to finish the last 7 miles. Somehow I followed a road marking that was two years old and “blacked out” but I still made the turn. There were road markings on this route also, although they looked a little worn. At this point, I was fatigued and just thinking about getting to the finish. I saw “<- XFL Finish!" on the road and turned in to a park. An empty park. Wrong park but I didn't know that. I rode all around the park looking for people. I had beat my goal of 12 hours (11:55) but where was everybody? I waited and waited. Nobody showed up. I rode around the park again. Found one lady who told me that this was not Bayport Park anymore, it's now Linda Jenkins Park and she didn't know exactly where Bayport was but it was "back that way." 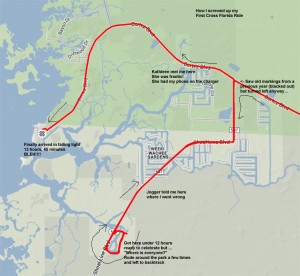 How I got lost

I almost went further in the wrong direction, but turned back up the road I was on and found a jogger who gave me good directions. I was about 7 miles away, ugh. It was getting dark, I had no lights, and my phone was in the truck on the charger. Not good. 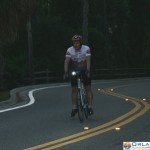 Fortunately I got back on the right road and Kathleen found me. I got lights out of my bag and finished the ride. I rode in to see Kathleen, Crockett and my new friend Kerry, waiting for me. It was embarrassing coming in so late (almost 13 1/2 hours) but I figured I had a great story. 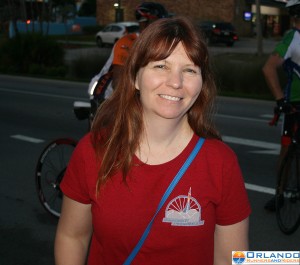 We would have been lost without Kathleen. It was SO vital, so important, that she was waiting for us at the next stop, with a truck full of all the things we needed. Thank you again my lovely wife, for sacrificing your weekend to help us!

Didn’t really want to hang around so we jumped in the truck and headed home. I was dreading the drive home. I thought it would be painful and long. It wasn’t. It was a fun reflection on the days activities as all three of us talked about the events of the day. Yes we were tired but we had done it, we had gotten through our first Cross Florida ride without serious incident.