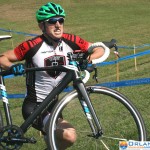 Josh and Kayleigh Thornton were our kind and generous hosts October 18&19 for the second of the Wicked Awesome Race Series weekends. This is a three-weekend race series for Cyclocross competitors, held under USA Cycling rules. Cyclocross, aka “CX”, is a fast growing sport in Central Florida, and throughout the country as well.

The Wicked Awesome Race (WAR) series is turning out to be a cornerstone in the Florida CX scene. With a total of six race days, and opportunities to do multiple races each day, there are a lot of USA Cycling ranking points to be had.

All three weekend events are held in the vicinity of Dade City, FL. Weekend 1 was in Stanley Park. Weekend 2, which this report will feature, was in John S Burks Memorial Park.

It seemed Josh looked for every sandy, off camber turn he could find and put the tapes around them. Those generous with words declared it a “technical” course while others had less flattering things to say. It’s supposed to be challenging and it was. Several turns were on steep downhill sections with random piles of sand thrown in just to make it interesting. 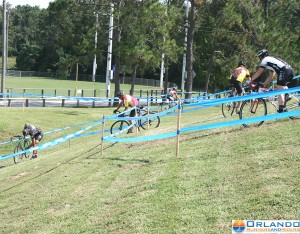 The riders were challenged by the frequency of off-camber, downhill turns

The course changed during the weekend as well, getting softer and more difficult after each pass of frenetic riders. The dew on the grass early Sunday morning made the M35,45,55 class rather interesting as well, as the corners became quite slippery.

Weather was perfect for the weekend: scattered clouds, no rain and temps between 70 and 85 for all races.

I am fairly new to cyclocross. In fact, I still use my 29er mountain bike. One of these days I will get a cross bike, if my wife will let me. I enter races with my 29er and do my best. I often get lapped but it is a fun time anyway. The cross racers are always friendly and though they may kid you a bit when they heckle you from the sidelines, they are always polite when they pass you on the course.

Saturday
I got there slightly later than I wanted so I did not have time to preview the course before my Masters 35,45,55+ race. My first lap was my preview. Wow. That was interesting. I didn’t fall but I unclipped a lot. Many narrow turns, off camber, through piles of sand, on the edge of cliffs, etc. I have to remember that the Masters races are 45 minutes long, too. It was a long time to be at or above threshold heart rate.

I kept pushing because I had a “rabbit” in front of me most of the way and caught him just before the finish. Turns out he was not in my group. I finished 7th out of 8, and 8th place had a mechanical. I was still happy I finished 5 laps in 52 minutes.

My next race wasn’t until 5:30. I mostly rode around the park keeping my aching and lactic acid filled legs warm, but I did manage a lap just prior to the Mountain Bike / Single Speed race, and noticed that the course had changed. It was more “dug up” and even more difficult. I started out slowly, as I was pretty spent from the day. My training paid off though, as I began to pick it up. I registered my fastest lap of the weekend during this race, a 9:04, which although is not that great compared to the 6 minutes plus the guys were doing on cross bikes, it felt pretty good to me. There was another mountain biker in front of me though, and he was getting closer. I realized I had a chance to catch someone. I avoided the temptation to get excited and speed up to him. I figured (correctly) that if I was gaining on him now I would continue to do so. I kept on “racing the course” instead of racing the other rider. Eventually, I caught up to him on one of the steep downhill turns, and he let me by. Then I started worrying. Would he speed up and catch me? Short story: no. He steadily dropped back throughout the rest of the race. I crossed the finish line after my fourth lap in just about exactly 40 minutes. 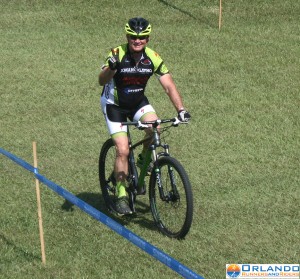 Mark Schwab, a rider about the same level as me. Makes it interesting to have someone to race!

I found him in the parking lot, introduced myself and thanked him for inspiring me. Mark Schwab turned out to be a friend of a friend, John LaManna. We stayed around John’s tent, talked and had a beer after the races. Then he informed me they were looking for me at the podium. What? I had finished third? My first ever podium in a cycling event. 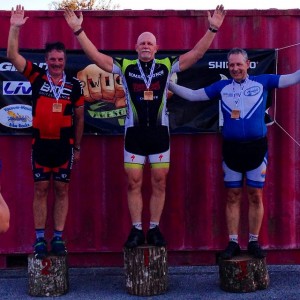 My first time on a cycling podium. Third place in the Mountain Bike division

During our post race beer and analysis, we discussed the course (of course) and both decided that it would be worth it to try using flat pedals on Sunday, as opposed to clipped in pedals. (Some people wrongly call them clipless pedals. The correct term, from the clip and strap days, would be strapless pedals!)

As you will see, it was a good call … 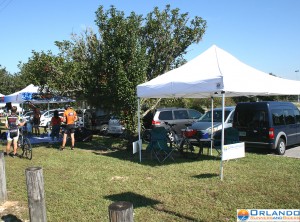 My “Sanctuary” for the weekend.

Got there in plenty of time Sunday morning to not only set up my tent/pavilion/sanctuary but also to run a warmup lap. Josh had made two changes to the course, making it longer and more difficult. At least I was expecting these two changes when I got to them.

Perhaps it was the cooler, morning temperatures, but the 45 minute M35,45,55+ race seemed a little easier today. I still got lapped but I also passed many people. It was a bigger field as well. However, I still ended up 2nd to last (9th out of 10) in my division.

The dew on the grass made things interesting. One spot required traversing some tree routes as you navigated a copse of trees. The wet roots caught me, even with flat pedals, and I fell on my side, skinning both knees and my left shin. Didn’t hurt much but it bothered me all day.

Now came the long wait until the MTB race at 2:30. I had some lunch, tried to take a nap, played with my cell phone, and rode around the park some more. I even went and did a slow lap just for the heck of it, and did another right before my race.

It was starting to warm up and I noticed a lot of teams “breaking camp” and leaving. I hoped we had enough for the last race! Turns out there were only three of us on mountain bikes: Mark, his wife Connie and me. Well that guaranteed a podium anyway! Connie told right at the start that she was inexperienced and was going to go very slow and just “get around the course.” Although we both lapped her, she did very well and managed to complete 3 laps. 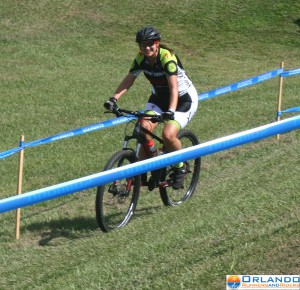 Connie made the race legal (need three to be scored) so thank you for that!

As I expected, Mark took off from me at the start. Same as yesterday. I kept my patience. I kept reminding myself “race the course, not the competition.” There were some new single speed people who were in the mix. Several times they had pileups in front of me that required me to walk my bike around them. (No one was hurt, they fell in the sand.) I kept patient. I would see Mark off in the distance from time to time. About halfway through the second lap I noticed he was getting closer. Ah ha! I crossed the start/finish line right behind him to start the third lap. (I expected us to get 4 laps in, even though it is only a 30 minute race.

I was not ready to pass him yet though, with 2 laps to go. I did not want to be in the lead position, worrying about him. Several times he looked back at me as if expecting me to pass and several times I slowed down and stayed where I was. There was one section of the course, about 300 yards long, that was on a steady 4 to 5% uphill grade, and through thick grass. It was a tough section that required a lot of effort, although not technical at all. It was on this section that Mark pulled up. I couldn’t stay behind him any more. I passed him, muttering to him “Oh all right, I know this is your strategy move.” But he was done, he had used up his “stuff” and had nothing left. I steadily increased the distance, and crossed the finish line a minute or two ahead of him for my first cycling win ever. Hey, there were only three riders I know, but a win is a win.

I expect Mark will be gunning for me in the next few races. He knows what he has to do now. It will probably be pretty funny to watch us, each trying to let the other one lead. 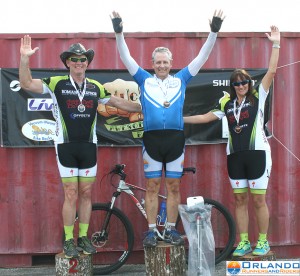 My first win, and it was great to share the podium with Mark and Connie, who are great people. I love cross racing!