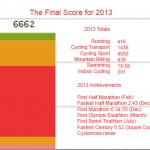 This journal will keep track of annual goals and achievements for John Tenney. It should be in reverse order, most recent month to oldest.

April
Started out on April 2nd at the NTC Short Course for a mountain bike race. Jami turned the course around on us which both made it harder and easier for me. Harder because the loops were longer but easier because the climbs were not quite as steep. I did three loops, the longest option, and I was the last guy running. So I finished last in the three loop division, but many people quit after two loops. It was that tough!

April 5th was the State Time Trial Championship in Palm Beach. The course was actually out towards Okechobee. It was a difficult 24.8 mile course, although it was flat the road was rough in places and here was one long stretch down SR 80 with many cars whizzing by at 70 mph. Bill and I represented for our team. I ended up averaging 20.3 mph with a 1:12:50 time. This once again put me at 12th out of 13 in the Masters 50+ division but this time with a difference, there were several guys that missed their start time, and were allowed to start later with no penalty. Also, 3 guys didn’t start at all, so my actual placement percentage should have been a little better. I’m not complaining because it’s not like I’m in the running for a state championship 🙂

The next day was the annual Cross Florida event put on by my friends at Space Coast Freewheelers. Starting in Cocoa Beach, it’s a 167 mile trek to Hernando Beach on the west coast of the state. I did an article on this elsewhere but the gist is I made it 167 miles to “a” beach in less than 12 hours, but I was at the wrong park. It took me nearly two hours to figure out where I was and how to get to the right place, and added 10 miles to my total, so I rode 177 miles in one day. Definitely a new record for me.

The 8th was the next installment of the Airport TT. Just Randy and I made it out for the team, as it was windy and threatening rain. Neither of us got much of a warmup but we rode it anyway. My legs were rubber so I was happy with my 20:11 time in the wind. Randy and I finished 13th and 14th out of 15 but we were happy to ride. 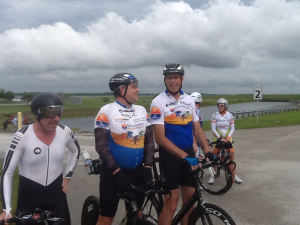 The 9th I went out to Lake Louisa (finally) for my first road race of the year. This was a serious week of riding for me! I got dropped immediately but I finished, and Adam awarded me 18th place out of 40. (Most people quit when they get dropped in this race.) I did get lapped, but I went ahead and finished anyway. 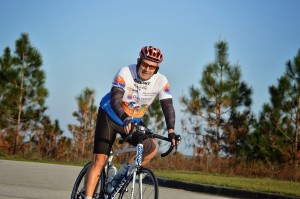 On the 12th the team went to the UCF Time Trial, which oddly enough has a Masters 50+ division. Bill, Randy and I entered the 7.1 mile course on Lake Nona Blvd. It was a nice course which featured a double climb, out and back over the 417 overpass. We finished 16th, 18th and 19th out of 19 entered. Yeah that’s how we roll. By the way I missed 17th place by a tenth of a second! We both show 19:45 as our finishing time but David Riusech was given the nod. I’ll be watching for him …

On the 19th I joined Bill and Ward Bates for a test ride on Deer Park Road, where we hope to one day host the State Championship TT. I laid out a 24.8 mile course and managed to do it in 1:13 and change, which isn’t bad for a first try and without all my aero equipment.

On the 29th I was the only team member to make it out to Airport Time Trial #5, as the weather was seriously threatening. It was raining hard when I got there. I waited for it to stop and rode a practice lap. The course was wet but not too bad. There was an option to ride two laps but there was a thunderstorm looming near the south end so I only did one. I set a new record with 18:38 but finished 2nd out of 2 in Masters 50+ for my division. It was definitely my best yet. It was kind of hard to say how I did because many of the big hitters were doing two laps. I finished 8th out of 9 in the single lap group. 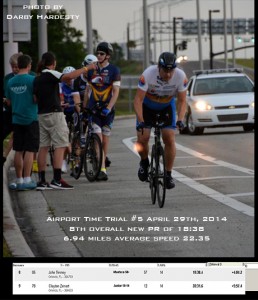 8th out of 9 of the single lappers

March
On the 1st I started out the month with the Winter Haven “Chain of Lakes” Time Trial. Put on by my friends at Topview Sports, this 8.1 mile time trial takes place out in the middle of nowhere, somewhere south of Winter Haven. I was just hoping to finish something other than last, as a lot of heavy hitters were out there. A total of 105 riders were entered. I was in the Masters 50+ division which had 13 entrants. Even before the start my equipment was giving me problems. My Garmin computer was picking up someone else’s heart rate monitor, and since my power meter is on the fritz, I was now without my primary measurement for level of effort. Also, it was the first time I was “held” for a start, where some lucky guy holds on to my saddle and I clip in both pedals. I was nervous as I had no idea what it would be like to pedal away from a standing start. Not to worry, JP Russo did a great job of holding me up and reassured me that it was easy, I would be fine. He was right. It was a weird course, started off downhill and went out to a very narrow and treacherous 180, where I had to unclip to get around, and then finished on a long uphill section which really hurt. I finished in 22:27 for a 21.43 mph average, which I will take. I also beat someone, as I finished 12th out of 13 in my division and 89th overall. 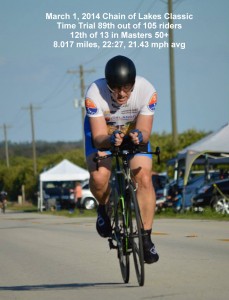 On the 8th, Kathleen and I decided to run a little longer than usual around the neighborhood. I got a little over 7 miles and she ran 5 miles for the first time in her life. She was very excited so I took her out to dinner to celebrate that night.

On the 15th I entered my second Wildman Duathlon. Last year I finished in 2:51:23. I wanted to be fasted this year and I was – by more than a minute. 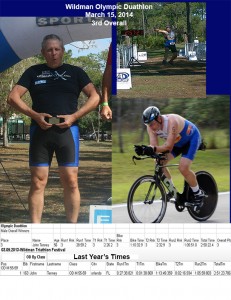 On the 18th I did the Airport TT, which has always been a favorite event of mine. This time Randy and Bill joined me, so we once again had three riders in the event. Bill was the fastest of course, but Randy and I both posted record times as well. I did 18:58, finally cracking the 19 minute barrier. Average speed 21.95 mph(!) 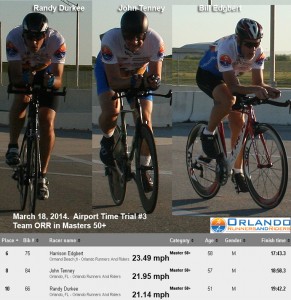 Crockett and I continued to do our Clermont route on Sundays as well.

February
February 1st our group teamed up with East side again to do a century ride to Titusville and back. The weather started out miserably, with heavy fog and wet roads. It was also still unseasonably cold, in the mid 50s. We were cold and wet most of the ride. The last 40 miles were in to a chilly southwest headwind and were very painful. Crockett and I managed to ride home, as we resisted the urge to call the wife and ask her to come pick us up. In retrospect, we think now we should have called. The pain was not worth it!

On the 4th I took my road bike down to Heintzelman Blvd (site of the Airport Time Trial) for some after dark practice and it wasn’t bad. I was the only one out there. The road is well lit and I managed to do two laps plus a side road, adding 20 miles to the 20 I put on the trainer earlier. Practicing for the next Airport TT!

On the 8th I entered the Xtreme Half Marathon, which was my first half the year before. I was hoping not only to beat my last year’s time of 2:52 but to bring it down to 2:30 something, so I could beat my sister Julia’s best time (2:39). It was a chilly, rainy day but actually not bad for running. I hit 13.1 at 2:37:40 but I wasn’t at the finish! Due to some construction at Orlando Wetlands Park there had been a slight reroute which added almost .4 miles to the route. I finished in 2:41:40, with 13.48 miles on the Garmin. I still count it a win. My legs were sore the next day but not as bad as last year. I still managed to go out to Clermont with Crockett and Manny and ride 2 loops, for 51.3 miles. 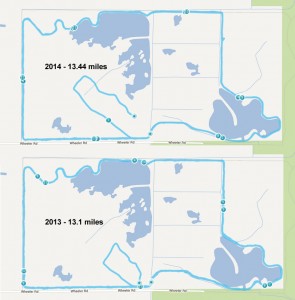 This map shows how the reroute added .4 miles to the half marathon trail run

January
It started off great, with the Annual Hal Downing New Year’s Day ride. I stayed with the lead pack a long time this year, and stayed with the second pack up until the finish. Set many new personal records on Strava segments. On the 12th I was having a great ride with the East side gang, and on the way back with my friend Crockett Bohannon, we touched wheels and I went down hard. Injured my neck and right shoulder. This affected me negatively the rest of the month and as I write this (Feb 11) it still bothers me a little. I managed to complete the Jack Frost Duathlon on Jan 18 in Avalon Park (the picture at the top of this article) third overall and first in my age group. Of course, the 39 degree temps kept a lot of people from showing up, so there wasn’t a lot of competition. Hey a win is a win! I beat all those people that stayed home.

I put on a charity fund raiser time trial on Jan 20th, Martin Luther King day, around Fort Christmas. I ran the course myself after everyone else and set a new personal record, surprisingly, because I still wasn’t feeling well. I attribute it to the space bike and the new wheels. We didn’t get a great turnout as it was cold and foggy in the morning, although it turned out to be a beautiful day. We only raised $40 for charity. 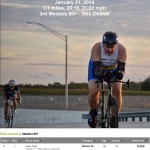 The next day marked the return of one of my favorite events, the Airport Time Trial series, put on by Top View events. I was 26th out of 34 over all, but finished 3rd in masters 50+ which got me a Winter Park Cycles gift card! I need to go spend that …

This event is planned out on many Tuesdays throughout the year and I hope to improve my time as the year progresses.

I only got one dip in the pool this month as the temps were unusually cold. In my wetsuit, I completed 500 meters, but with a lot of rest stops. Not in swimming shape at all yet!

The rest of the month I spent a lot of time on the space bike hooked up to the Cyclops indoor trainer, since it was so darn cold outside. I’ve decided to count the miles towards the “Race to the Moon”