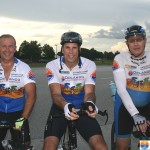 Dual race report coming here, as your author apologizes for being a little bit behind.

“I had the opportunity to try the new Fishhawk Time Trial series put on by R&M Cycling, leader Nathan Rogut, near Brandon, FL (outside of Tampa.) A few weeks later I returned to the Airport Time Trial for race #8 in the series” John Tenney tells us, “Both were breakthrough races for me, and for the team as well.”

Below are two race reports from John.

This is a new venue and new event. Located in a rural area just southwest of Brandon, FL, the course is a 14.1 mile out and back, a little over 7 miles in each direction. July 24th at 6pm the inaugural event was launched. I was the only one of our team to make this one.

My goal was to be under 42 minutes. Since it was my first time on the course I did not anticipate really trying to pound it, but to pedal hard while studying it. 42 minutes would still be a 20+ mph average.

On the way out, the last uphill section of the course was slowing me down, as I was unable to maintain 20mph up the hill. When I was held up at the turn as Roy let two large trucks go by, I noticed I was turning at around 22 minutes, which if doubled did not beat my goal.

Fortunately the downhill on the return allowed me to pick up speed. Only one incident ruined a perfect return ride as a large SUV passed me going around a corner and then stopped in front of me, blocking the entire lane, as they waited to make a left turn on to a side street. I had to slam on the brakes and pass the SUV on the shoulder. It not only slowed me down but of course drove my heart rate up a bit.

The finishing stretch is slightly uphill but I didn’t notice as I was using up all the power I had left. I crossed the line in 39:50, which was well better than my goal and resulted in an average speed of 21.6 mph.

After the race we retired to the nearby Buffalo Wild Wings for some well earned socializing. There were 16 riders total for the race.

This was the eight installment of this 10 race series, and our team was represented by myself, Randy Durkee and Chuck Peabody.

The venue has been discussed in previous articles. August 5th, the weather was hot and a little muggy, but the winds were somewhat light. The temperature was 93F at the start and only cooled to 90F by the end of my lap.

I made the turn in 9:15 which worried me, as I was shooting for a finish in the low 18s. Not to worry. I picked it up on the return leg, caught and passed not only Chuck but a couple of others that started before him and finished with a new PR of 18:17. My highest average ever for any time trial, 22.8 mph.

Randy and Chuck also set new records as well. Randy finished in 19:24 and Chuck finished in 20:17. Both exceeded their previous times by 15 seconds or more. 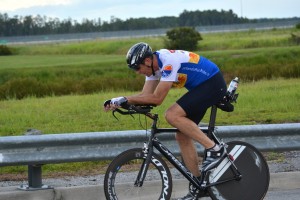 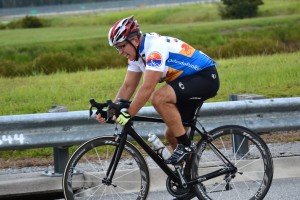