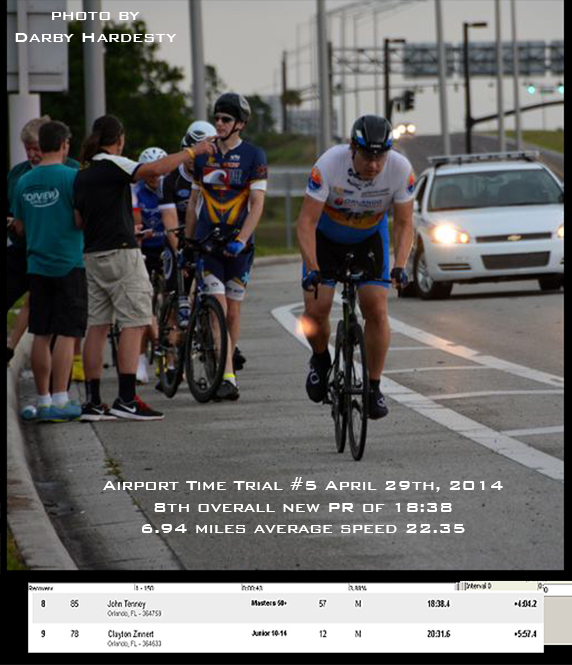 Airport TT Race Report: John Tenney
Venue/Weather/etc.
As has been said previously, the Airport TT venue is an excellent place to time trial. In addition to the wide bike lanes, today we had support from the Orlando Police (who left two squad cars at the start line with lights on to slow down traffic) and a representative from GOAA Ops who gave us up to date weather. Great support for this race!

And the weather was definitely an issue. It was raining when I got the course. I waited in the car for 15 minutes for it to stop. When it finally did stop raining it still looked pretty ominous. Fortunately Claudio Mayol (a race volunteer, there every event) convinced me to stay and at least ride the course. So I took a ride up and down Heintzelman and it wasn’t that bad although very windy. The south end of the course looked really ominous – with dark skies and thunder clouds. Still, I got back to the start totally dry. I decided to go on with it, but I elected to do only one lap (Tim was giving us the option of 1 or 2 laps, 7 or 14 miles.)

Race
The 14 milers left first, and then the junior 7 milers. I was the first of the adult 7 milers to start so I expected to be passed early and often. Oddly enough the first guy to catch me did so about a half mile before the turn and he inspired me to try and catch him. I stayed at least 25 yards behind him (and everybody) so no drafting took place, don’t worry. Another guy caught me just after I made the turn and I let him go, and then decided to chase him. Although I never caught him I kept him in sight. No one else caught me the rest of the ride. I was trying to catch Clay Zinnert in front of me but he is improving and although I gained a little I never seemed to get close enough to make a difference. Clay did a 20:31 which is not his best but hey, before this year that would have beaten me every time!

It was difficult to say where the wind was coming from although I was getting knocked around a lot. I’d say it was a crosswind from the east most of the time. When the course takes the little jaunt to the west at the south end I did feel a little push.

There was (for once) no traffic affecting the 180 degree turn. I slowed to 16 or so because the road was damp but got right on the pedals and picked it up again right away. Except for the first climb from under the bridge my analysis shows I did not go below 21 mph on either leg. That is an improvement.

I crossed the line still pushing, although starting to run out of gas. That’s the way it’s supposed to be. I finished in 18:38 which beats my old record by 20 seconds. Average speed over the 6.94 mile course was 22.35 mph, also a new personal record for any time trial.

It started raining shortly after I finished so I headed for the car, loaded up and drove home very excited about a great effort tonight. 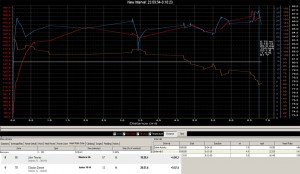